I’m currently between books – I just finished All the President’s Men and am in the process of deciding what to read next. Therefore, I bring you a post about one of my very favourite things: perogies!

On Saturday, my bestie/cooking buddy Kaeri and I decided to get crafty in the kitchen. We have been trying out recipes and making messes in the kitchen together for the better part of ten years and figured it was time to do a little cooking together. We were both craving homemade perogies last week so we grabbed a copy of Mennonite Girls Can Cook and settled on a recipe for the classic cottage cheese variety.

Mennonite Girls Can Cook is written by ten women of similar faith and backgrounds – one of whom attends my home church and is a close friend of Kaeri’s family. What began as a recipe-sharing blog has turned into two cookbooks and a lot of fun!

Perogy-making is an art. Kaeri and I both come from German/Ukrainian/Russian/Mennonite backgrounds and grew up watching moms, aunties (known in German as “Tantes”), and Omas make little dough pockets of perfection. My aunt’s nickname is literally “The Perogy” – it’s in the blood, I tell you! We started making our own a couple years ago because they are the perfect thing to make for a potluck – everyone loves a good perogy!

I grew up with the potato/potato-cheese variety but discovered cottage cheese perogies a couple of years ago. I wasn’t a fan at first but have since grown to love the little guys. In terms of ease, cottage cheese perogies take a lot less time to make because the filling is less labour-intensive (no boiling/mashing/mixing – all you have to do is add egg, salt, and pepper to dried cottage cheese), so that was a bonus! We were very pleased with the dough in the Mennonite Girls Can Cook recipe but recommend adding less salt than called for in the filling. Because cottage cheese is salty to begin with, we recommend cutting the salt measure (1 tsp) in half. We doubled the recipe and found that 1 tsp was more than enough – 2 tsp would have been overwhelming. We even had a little extra dough at the end and made three blueberry perogies – my first time making fruit perogies! They were a big hit – my dad has put in an order for more ASAP.

I highly suggest making ‘gravy’ to accompany your perogies (known as ‘white gravy’ or schmaunfatt – which is Low German and fun to say). Don’t forget to fry up some farmer sausage, bacon, and onions for a true Menno meal. For more recipes and the story behind the Mennonite girls who produced this cookbook, check out the Mennonite Girls Can Cook website. Make sure to take a peak at the projects these women have raised money for with proceeds from cookbook sales – it’s inspiring! 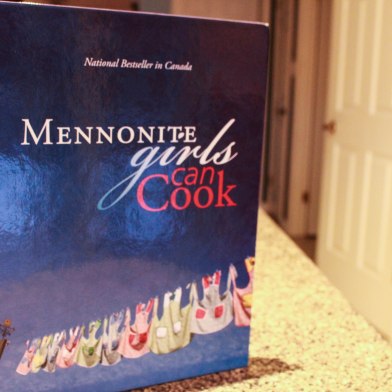 Perogies go by many names: wareneki, pierogi, varenyky, pedehey, pyrohy. My favourite: heaven on a plate.

It’s difficult to find dry cottage cheese – it isn’t available in most grocery stores. We purchased regular (full fat) cottage cheese and drained it. We used a strainer but I would recommend a cheesecloth and many hours. The drier, the better!

Kneed dough until nice and smooth. 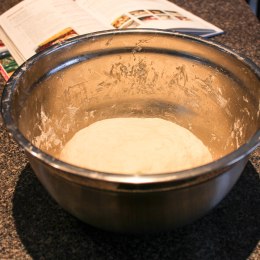 Cover and refrigerate dough for an hour. In the meantime, make your filling! 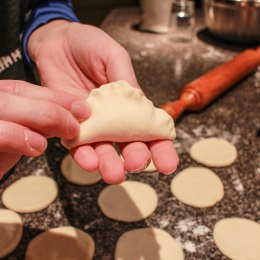 Best practice: pinch dough to dough. The dough will not stick together if it comes into contact with filling. 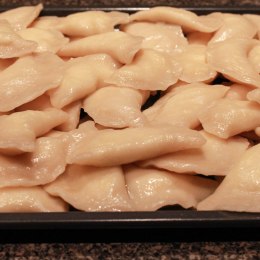 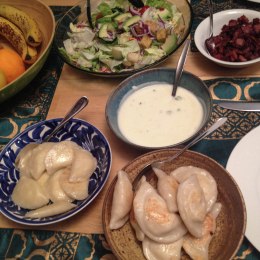 The most Mennonite of meals. We also had farmer sausage. It was delicious.

Since graduating from The University of Winnipeg in 2012 with degrees in Conflict Resolution Studies and Human Rights, Katrina has spent time working, reading, laughing, and traveling. In 2014, she went back to school to study Creative Communications, which is how Literally, Katrina got its start. Katrina works at Red River College as the Alumni Engagement Officer, and reviews fiction for the Winnipeg Free Press and Harper Collins Canada in her free time. View all posts by katrinasklepowich